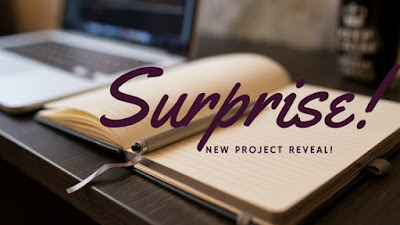 I am so excited to share this project with y'all! I've been waiting to share the details for two months.

I need to start out with a shout-out to someone awesome. This project wouldn't have happened without Ivie Brooks suggesting that Jules and I try to co-author a story again. Thanks, Ivie, for inspiring us!

The cat's out of the bag, I guess. Jules and I are working on co-authoring a story together!! *throws confetti* *cheers* *does a flip* *ends up in the emergency room because, girl, you should seriously stick with weights and running and don't try to do ridiculous stunts*

It's titled Ships, Secrets, and Survivors, which we abbreviated to SSaS. It's a pirate meets secret agent fantasy story and I'm super excited about it!

When we decided that we must write a story together (because, seriously, why didn't we think of it earlier?!), we started going over ideas that we had lying around. Jules had an old pirate story and I had an idea for teams (why am I so obsessed with teams?). We decided to combine them and create a new story of sorts.

We're considering it our gift to the YA community, as it has the promise to become a rather humorous book (though there's going to be a good bit of adventure and mystery as well). I get to let my inner Lemony Snicket run rampant! #fun

Here's a blurb, plus some character profiles for your enjoyment.


Adi is not your average princess, dreaming of more than dresses and dances. When her name is called on Selection Day for the Scaera Dumeda, a yearly test for the smartest and most cunning young people of Antovan to join the feared Shadow Squad, she throws away her title, despite her family’s threats of disownment and the uncertain future ahead. This may be the opportunity she hoped for.


Jay Hill is the fearless captain of the Red Wind, and was believed to be a ghost story until one of his crew is selected for the Scaera Dumeda. The sailor, Ravin, is shocked and horrified at such an announcement. Ever since receiving an almost fatal blow in a duel he has been marked dead in the records.  He never even took the required test. Jay suspects the pirate Captain Rev Martin of treachery, but can do nothing except watch and wait as the event begins.


When other selectees start to die off unexpectedly (and contrary to the spirit of the event), Adi, Ravin, and the remaining candidates must learn to work together with Jay’s pirate hunters to defeat the evil lurking in the Scaera Dumeda. Can a motley crew with different goals learn to fight together? Or will they just end up making a mess of a disaster?

Adi- Short for Adima Radi Kashinda, but no one ever calls her that. She's a princess who dreams of more. Even though she is exempt from taking the test, she does so anyway. If she gets into the Scaera Dumeda, it might be her chance to write her own story.

Ash- Just Ash. Her pixie cut and rough-cut personality can be seen through a crowd. As an ex-thief, she is forced to take the test. While her first reaction is to fail the test, she learns to embrace the chance to destroy the government she hates so much.

Josiah- Skinny, fast, underestimated. Never thought he'd be selected for the Scaera Dumeda. When his name is called, he finds himself and his family surprised and pleased. He greets the first day of Scaera Dumeda with enthusiasm.

Liz- Don’t mess with the red hair. There’s an equally fiery spirit to go along with it. Having grown up a soldier’s daughter, she’s familiar with combat, both close up and far away. With the novelty of her hair and her cunning smile, there are few parties she can’t get into, which she often uses to her advantage. She greeted Scaera Dumeda with open arms. Time to make her father proud.

Hawthorn- Big bear of a man with a big bear heart. Even though he specialty is punching and often comes across as gruff, he really just wants to protect his own and will do anything to do so. As the son of a former winner of Scaera Dumeda, he knows what to expect. Or so he thinks and never ceases to tell the rest.

And one of my baddies, Marius-  A pointy looking man with an equally piercing personality. Having grown up in a mob family, killing is second nature to him.

The other baddie, Bonnie- As nasty as her name is cute. She grew up with a rich, doll-like lifestyle on the outside and a cold, abusive life on the inside and detested it.When her name is called on Selection Day, all of it snapped back to the forefront of her mind. Finally, a time where her real strength would shine through. No more dress up and tea-times for her. Except, of course, when a mission calls for it.

That's all for now! What do y'all think? Go check out Jule's blog for her character profiles! She's got the pirates. Most of them, at least.

Also, I apologize that I didn't post the Final Friday Flash Fiction last week. I had a crazy/stressful week, so I wasn't able to write it as planned. I am still planning on having a raffle for prompt suggestions, so keep an eye out for that!

Have any of you co-authored books before? What sort of wisdom can you impart us as we start this journey?