My Writing Process// Part One: Growing the Idea 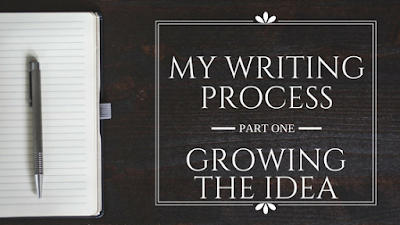 I wracked my brain trying to come up with post ideas for the NaNo season. A few weeks ago I settled on finally writing about my writing process, with a special focus on my first drafting process. Why not, since I'm first drafting right now? Besides, I kind of promised it to y'all way back when. I'm going to use The Herbalist's War as my example because it was probably my best thought out story. Except, of course, when I reach the editing part; I'll use The Dawn of a Hero for that.

As is the case for all writers, ideas come to me. Some are meh and just get jotted down in my idea notebook. Most likely, nothing will ever come of them. But some are shiny, tempting, and hold the promise to become a great story. The secret is I don't start writing right away. I write it down somewhere, usually in my idea notebook.

If I get other ideas for this one, I'll add it to the page. I'll dream about it. I'll come up with character ideas. An interesting setting. Maybe a scene idea or two (or lots). Plot twists. I'll write any excerpts that come to mind on 3x5 cards or sticky notes. If it's really tugging at me, I'll create a Pinterest board so I can keep all of my visual ideas straight.

Here's the trick: I let it simmer for a long time. This process usually lasts a year. If the excitement has survived that long, chances are it's the right story for me.

For THW, I came up with the original idea during NaNo of 2015. I wrote the first 52k during NaNo of 2016, then finished it during the next April Camp. It sat for an entire year before I started writing it. The first draft then came easily. The words flowed without hesitation. I never had a case of boredom or 'writer's block'. Every single scene was a dream to write. I loved this story inside and out.

So if you get that great idea, let it simmer a bit. Add some meat to the pot. You might not need to let it sit as long as I did, but it helps you know whether you should write it or not.

Next week I'll talk about how I take these ideas and turn them into a useful outline.

Your turn! What do you do when you get ideas? Do you let them set a while, or do you start writing immediately? There's no right or wrong answer.
Labels: My Writing Process NaNoWriMo The Herbalist's War Tips