The What If...? Fantasy Tag 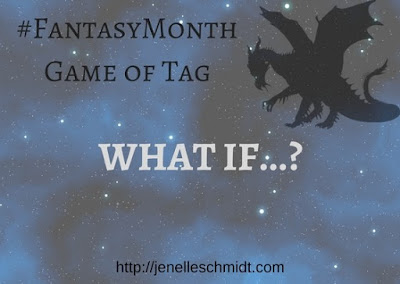 So... I had something completely different that I was going to post today, but I decided to scrap it because a) it wasn't working for me, and b) I really wanted to get on this tag ASAP!

When Erica over at A Story of a Storyteller tagged me for the What If...? Fantasy tag, I kinda squeaked in excitement because I really wanted to get tagged for it at some point and now I have! So yay!

The rules are as follows:

1. Thank the person who tagged you. Thanks so much, Erica. It made my day!
2. Include the graphic somewhere in your post. See the header...
3. Answer the questions. Coming soon...
4. Tag some bloggers and let them know that you tagged them. Also coming soon...
5. Have fun! It's talking about fantasy stuff. How isn't it fun?

Now onto the questions!


1. Your car breaks down in the middle of nowhere. The cast of the most recent fantasy book you've read comes to your assistance . . . Who are they? Will they be helpful?

It's the dwarves and Bilbo from The Hobbit. Here's how that would go down.

Kili and Fili would attempt to be chivalrous and helpful, but would likely make the entire situation worse.

Bilbo would pace back and forth, complaining about it being tea time in civilized places.

Thorin and I would have an argument about superiority, while I'm trying to get Bombur to not eat the last of the freshly baked double chocolate chunk cookies that I made for my trip.

The rest would go on and on about how they're at my service and such, while I'm telling them to shut up because I'm on the phone with AAA.

And then Gandalf would show up at the last moment and fix my car, but then borrow it without the intention of returning it so the company could reach the Lonely Mountain faster. I'd, of course, have to go along because THOSE. ARE. MY. COOKIES! Also, I'm superior.

2. You go to bed one evening and wake up in the lair of the villain of the last fairytale you read. Where are you and how do you plan to get out?

This is so easy, it's ridiculous. The last fairytale I read was Mother Holle (the short version. I had to read it for school). The villain, if there is one, is the mother or the younger sister. If I ended up in their house, I'd just leave. Easy as that. I might take the eldest daughter along because she deserves better, but that's up for her to decide. We could galavant across the country on fantastic adventures and she could think no longer about unappreciative family members. It'd be awesome. Maybe I should write a book about it...

Uhhh, a mythical creature as my best friend... Uhh... I think I'd probably go with a little dragon because I have a super soft spot for those. Plus, they're adorable and remind me of a mythical version of a cat. So yeah, as close as I can get to a cat would be just fine.

4. In a strange series of coincidences, you end up needing to take the place of your favorite fantasy hero or heroine. Who are you?

I'd either be Bilbo from The Hobbit or Kale from The Dragonkeeper Chronicles. Both are awesome and I'd love to be them!

If I were Bilbo, I wouldn't have said "good morning" to Gandalf. Would've avoided the nasty venture in the first place. And then I could live happily ever after with a group of people who actually enjoy eating.

If I were Kale, I probably wouldn't have changed anything. She's awesome. I love her character!

6. If you were yourself in a fantasy novel, what role do you think you would play in the story?

The nerd in the corner that no one notices until they realize that brains, not brawn, will save the day and then they come to me for advice. And then when we find ourselves under attack I just might surprise them with the fact that I actually can fight. #nerdsarestrongtoo

Basically, I guess I'd be like Wong in Doctor Strange.

7. One morning, as you are going about your daily business, you pick up an everyday item and a voice booms in your head with prophetic words about your future. What object is it, and what is the prophecy?

It's probably my kitchen knife and the voice will say "YOU'RE GOING TO DIE AT SOME MOMENT WHICH CANNOT BE DISCLOSED!"

Yeah, no kidding, Sherlock. I could've told you that. But first... these peppers have to be cut up and eaten or else they're going to go bad. Wasting food is wasting money!

8. You are transported into a magical realm and turned into a mythical beast . . . What beast/fantasy creature do you want to be?

A part of me wants to say Phoenix because I feel like that's most similar to my story, but that doesn't sound very helpful. I'll need to pick something else.

What about a Balrog? That counts, right? I could hide in the mountains and just chill. Scare the daylights out of a bunch of trespassing kids every once in a while. Die in a glorious battle defending my home. Yeah, that sounds like fun! #signmeup

9. If you could read your way into any fantasy realm, but the catch is you can never leave, would you? Which realm would you choose?

Narnia. It's the one fantasy world I'd likely survive the longest in. I'd go hole up in the mountains and avoid everyone (I seem to want that a lot in this tag, don't I?). Or rule the entire world (because I'm superior). Either one. I'm flexible.

10. As you are going about your normal day, you discover that you have a magical power. What is it?

Uh... the ability to grow extra hands if necessary? I would love that. I might not be a mom yet, but I definitely feel like one with all of the things I need to take care of at once. Extra hands would be awesome! Yeah, let's go with that.

Wow, I had no idea I would use 'uhh' so many times or have it turn into a post about food. Just another typical Sarah post, I guess. Anyway, that was a ton of fun!

I tag my Order of the Pen ladies:

Also, Rose and Elizabeth if they want to (but they don't blog much, so they probably won't).

You don't have to do it if you don't want to, but I certainly hope you do!

I hope y'all enjoyed this post. Onto y'all. What sorts of cookies would you take on a trip? Which is your favorite mythical creature? What fantasy character would you like to be? What power would you like?