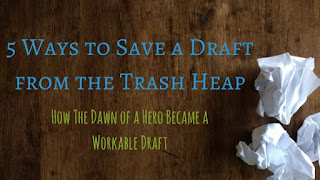 Wow, that was a mouthful. But anyway, seeing as I'm coming to the end of draft four of The Dawn of a Hero, I thought I might revisit some of the things that I did to prevent myself from scrapping this little story of mine. I compiled a list of five things, though there might be more that I missed. Maybe some of these are things that will help your story!

This changed the entire course of this story. When I first revisited it after I wrote several other novels, I had two choices: figure out what in the world was wrong with it (something wasn't right and I couldn't figure it out) or trash it completely.

I'm stubborn, so obviously, dumping it was out of the question until all other means of fixing it failed. After time and time of going at the draft and coming up short, I finally figured out the problem- I had the wrong POV character in this story. I wrote this book in James's POV, while the rest of the books are in Laylah's. So I set out to rewrite the entire thing and came out on the other side with a vastly improved draft. It was still pretty gross, but I was much happier with it. I could work with it. It fit the rest of the series. It wasn't as much of a failure anymore.

I've written about this before. I had a number of characters that I took out of the story entirely. They made it hard for me to focus on developing the characters that really did matter. I spent so much time trying to get them to work, but finally decided they weren't worth keeping. Now that they're gone, I'm a much happier writer.

I admit it: I'm not great at villains. Making them scary/believable is a challenge for me. No matter how many articles I read, I still couldn't figure out the secret. It didn't help that I wrote this story as a tween, so I hadn't yet read a lot of books and didn't know what I was looking for. Now that I'm older, I realize that a villain's personality doesn't necessarily have to be scary, but rather his motivations. So now one of my villains is actually rather amusing to me and his motivations are a bit more terrifying (though I still have some work to do in that department). And this leads me nicely to my next point...

I always struggled with villains until I wrote The Herbalist's War. When I wrote that story, I really started understanding how motivations impact the plot and overall story. When I went back and revised TDoaH, I dove into what motivated my characters, especially Laylah and Sorrus. By doing that, I was able to make him scarier, her more desperate, and the overall story improved (I think).

I had quite a few cliches in my story. It's pathetic. I had prophesies, super 'scary' villains with useless minions, and a horrifically perfect MC. Just thinking about it makes me want to gag. Obviously, those had to go. With each draft, it seems like yet another cliche is taken out or twisted, which makes me super happy!

Now onto you! Have you ever written 'disaster' stories that needed major changes or else they'd end up in the dump? What changes did you make? Did they help? Are you able to work with your story now?