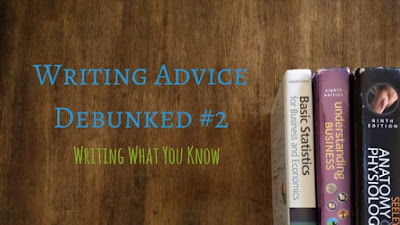 Welcome to the second installment of the Cliche Writing Advice Debunked series! This post is inspired by a suggestion by Lila Kims. Let's get to debunking, shall we?

"Write what you know." Ugh. We're so tired of hearing it, aren't we? Write what you know. Blah, blah, blah. Yeah, great. That's sooooo helpful. I'm sorry, but I'm pretty sure Tolkien didn't know any elves personally. Or dwarves. Or most of his story material, for that matter. Clearly, this advice doesn't provide much help, especially not for those of us who write spec-fic.

What should you write about, then?


~Write about what you don't know~

There are many instances where we know nothing about the topic we're writing about. I have a part in The Herbalist's War where it's pretty heavy on the medical side. I don't know anything about it. I'll have a lot of research to do to make sure I get the details right when I edit. I might not be able to keep that part because it might not be realistic. I don't know what will happen with that scene, but I wrote it anyway. Now I have an excuse to learn about a topic I know little to nothing about. It doesn't matter if the scene stays or not; I'll have learned something valuable.

Write about things you know nothing about, but want to learn about. Is it medicine? Is it a certain disability? Is it about science? A historical period? Writing about these things forces us to learn. While we might not be able to keep it in our stories, we don't waste our time. We learn something about a topic we wouldn't have otherwise delved into. Maybe we can put it into another story where it works!

~Write what you feel~

~Write what you create~

For all you Spec-fic writers, here's a special message for you. We create worlds. We make new realities. Most of the things we write about, we don't know anything about. Not really. There's no tangible understanding of dragons or fantasy creatures. We have no idea what the technology or science will be like in the future. Maybe the world will fall into shambles, maybe it won't. We don't know, but we write about it anyway.

I remember I once spent thirty whole minutes researching large, freshwater fish to use in The Dawn of a Hero, only to have Jules text me and say that I was writing fantasy and I could come up with my own fish. *facedesk* DUH! So here is a time where I can write what I create, instead of what I know.


~Write what you know~

What's something you know better than anyone? Do you want others to be educated on a certain topic? Then write about it. My only warning is to make sure it works with the story. Don't force something into a story if it doesn't belong. So many stories fail because someone felt passionate about something and then shoved it into a plot, but didn't do the topic justice.

There are times where we write what we know. Why else would we write? But as we continue down the path of writing, we have to learn, grow, feel, and create in order to write something worth reading. Don't be afraid of writing the unknown. You have the privilege to make it known to the whole world.