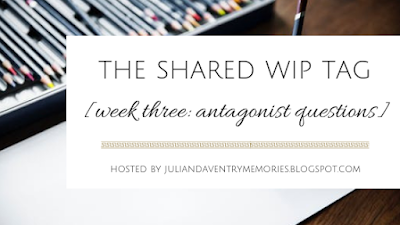 Welcome back to the 5-Part WIP Special, hosted by Julian Daventry. If you missed the last two posts, you can check them out here and here.

This week is all about antagonists! Let's get into it, shall we?


~Introduce the main antagonist of your book!~

My antagonist is Simon Chamenos, the dictator of the US. He believes that he is able to make anything into law if he follows the order with Simon Says.

We both have a hard time connecting with our minds. Sometimes we feel as though we're disconnected and fuzzy. We're never sure what's real and what's fake. Basically, we're half-crazed.

I just try to channel my crazy towards good outlets (like participating in NaNo) instead of willy-nilly hurting people.


~What does your antagonist do when he/she is mad?  Do they have a soft spot?~

As far as his soft spot, let's just say it's a spoiler, so you won't be getting any answers from me.

~Who is your antagonist’s worst enemy?  What is their greatest fear?~

His mind is his worst enemy. He's gone crazy. He can't trust his own thoughts anymore. After a while, he just stopped trying to fight the lies and instead allowed them to control him.

His greatest fear is also a spoiler.

~What is your antagonist’s weapon of choice?~

A camera and his words.

~How would your antagonist surprise your reader?~

He's actually thoughtful. I mean, don't get me wrong, he is evil, but there are people he cares about deeply and often does his best to show them that (as paltry as those attempts may be). If only he would allow that part of him to win inside instead of his dark side, maybe things would be different. But as it stands, the world's in flames and he's to blame.

~What is one thing your villain would never do?~

Why are all these questions spoilery? Not fair, precious.

Aside from the spoiler, I'm not sure what else he wouldn't do.

~What lie does your antagonist believe about the MC?~

That she's perfect. He believes that she can't do anything wrong (LOL, lies!).

~What is your favorite thing about your antagonist?~

I love a lot of things about him, but I think one of my favorite things is his mind. I feel like it's a lot like mine, in some ways. His brain is fuzzy. Thinking is a bit convoluted and uneasy. He's never sure if he can trust his thoughts. I feel like his story is how mine could turn out if it God didn't hold me back.

~If your antagonist was your MC, what would your book look like?~


I honestly don't know how it would look. I mean, he's kind of a secondary MC in my book, so it really wouldn't look much different. It wouldn't really be any darker. It wouldn't be any crazier. I'm not sure.

There you have it! My crazy antagonist! I know the answers were a bit vague this time around. I really can't give much away without spoiling the book. You'll have to forgive me.

As always, make sure you go and check out the other posts this week! I'll do my best to update the links as they come live.

So, are you intrigued about Simon? Curious to see how he'll turn out? Loving that he's crazy? Let me know in the comments.