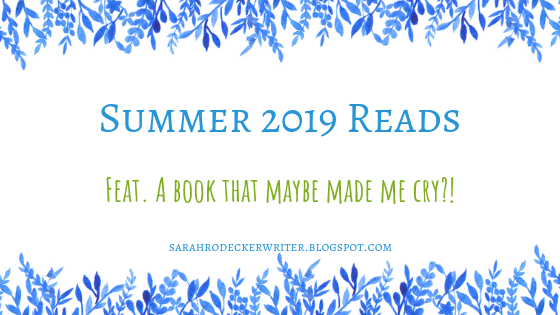 As I was going through my seasonal wrap-up, I realize that with all of my mini-reviews of the books I read this summer, my post was going to be way too long. So I decided to create a separate post for my reviews so that it's not an overwhelming post.


Also, I kinda upped my Goodreads goal. Apparently, I've already reached 22 books for the year, so I increased it to 40. Who is this person that is reading all this stuff? I don't recognize her!

During August, I co-hosted and participated in the Realmie Readathon with Jules over on Instagram, where we encouraged people who went to Realm Makers to read through the books they purchased there. It was so much fun!!

1. Body Under the Bridge by Paul McCusker. Recently, I remembered mom getting me the Father Gilbert radio drama years ago and that I really enjoyed it, so I went and looked to see if they had any books based off of it. Sure enough they did! And, better still, my library had the ebooks for it, so I just had to check it out.

Anyway, I have mixed feelings about this one. On one hand, I absolutely loved Father Gilbert's character. His dry sarcasm was hilarious. It sounds just like how I talk a lot of the time. Also, a lot of his Biblical commentary had me nodding along. I wished I could highlight a lot of what he said because it was GOLD, but alas it was a library ebook and that wasn't possible. I just really wish I could interact with him. He was a fascinating character.

But, while I only had one issue with this book, it was a big one and is the reason I won't go and buy it or recommend it to anyone. It kind of upsets me, too, because it was SUCH a good book besides. It was the heavy handed use of the supernatural themes. As a Christian, I know that there is a spiritual realm that we are commanded to not look into.

From what I remember from the radio drama, it had some of that, but ended proving that it was in fact real people committing the crimes and not demonic possession. I was hoping that was what this book was going to do, which is why I kept reading, but it did not end up that way. I was rather disappointed. It was very close to getting 5 stars from me, but ended up with 2.5.

So, do I regret reading this? Yes and no. Again, I loved the Biblical bits because they were SPOT ON! But I wished I never read the parts where it delved into the realm that we're not supposed to. For the future, I think I'll just stick to the two radio drama episodes that I have and enjoy those.

2. The Printed Letter Bookshop by Katherine Reay. I went into this book a little hesitantly because I've heard next to nothing about it, but the cover looked so cute, the premise sounded promising, and I discovered that it was published by Thomas Nelson, which, while I'm not always on board with what they publish, at least means it at least started with a semi-Christian viewpoint. So I picked it up and gave it a shot.

It was such a delightful read!! There was such a literary feel to it (duh. It's in a bookshop). I found a piece of myself in each of the characters, which is something I loved. It was less of a "which character am I" and more of a "I find a little bit of me in each of them".

I do feel like a lot of the dialogue was a bit clunky, especially closer to the end. Some of it just didn't feel like how a normal person would talk.

But I loved how romance kind of took a backseat and the growth of each character took front stage. That was awesome. Each of the three women had something in their past they had to grow from and move on from and it was just cool to watch. I (almost) cried during part of it.

I liked how it used Proverbs 31. It wasn't the typical interpretations of either "super housewife only" or "mega entrepreneur woman who don't need no man", but rather showing that it is attainable to every woman of God, no matter where God places her and I am 100% here for that.

So anyway, I really enjoyed this one. 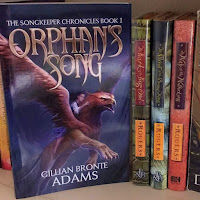 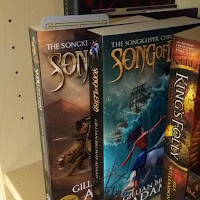 3. The Songkeeper Chronicles by Gillian Bronte Adams. I won the first book in a giveaway about a year ago (maybe) and I only just now got around to reading it. I actually won a copy with the old cover (so I bought the new one at Realm Makers and gave Jules the old one so she could read it).

I'm glad I did. I enjoyed most of the characters, especially Ky. His care and consideration of the Underground kids was really nice to see. I loved that, even though everyone pressured him to only care for himself, he never allowed himself to get hardened.

4. The Book on Public Speaking by Topher Morrison. I actually started this book earlier this year for a public speaking class, but never got around to finishing it until July because it had to go back to the library. I was going back over my goals for the year and realized I wanted to read more non-fiction, so I checked it out again and finished it up because I was actually enjoying it and was almost finished with it.

I guess I kind of expected it to be more like a textbook, but it was directed more towards professional speakers, which means it's a lot more useful in the real world than a textbook. So anyway, despite it not being too helpful for my class, it gave me a lot of good information about professional speaking and how to make it work in your career should you choose to use it.

I really enjoyed his no nonsense approach to instructing. I've discovered that part of my learning style is people being a bit abrasively straightforward and commonsense. Whenever that's a part of a class, I soak it up.

There is a bit of mild swearing in it, so beware of that if it's something you look out for. 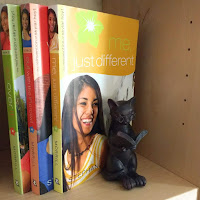 5. The Reinvention of Skylar Hoyt series by Stephanie Morrill. A little while ago, Stephanie mentioned that July was the 10th anniversary of Skylar. I loved the series so much, that I figured it was a great time to go back and reread them. #bestideaever

I don't know what it is about these books, but they make me feel all the feels. Like, I found myself sobbing at the end of the first book. Not really over the book itself, but the life events that it brought to the forefront of my mind. 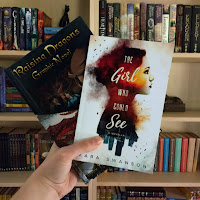 6. The Girl Who Could See by Kara Swanson. Basically, I'm 5000 hype-years behind on reading this. And I have zero excuses.

When I went to Realm Makers, buying this book was top priority. I was NOT going to allow myself to walk away without buying it first.

My thoughts are pretty much exactly like everyone else's. Loved it, but a part of me wishes it was longer.

I would have loved to see a lot more resistance and growth from the characters, particularly Fern and Barstow, but I know that if Kara spent more time on that, she would have lost the ticking clock that kept the pace going. So I understand why she didn't.

Also, that cover. Let's just appreciate it in all its glory because it is #goals

This was a fun read. A much better graphic novel than the Percy Jackson one that I read a few months ago. While there were many things left out (at least from what I remember), I really enjoyed it. It only took me about an hour and a half to read.

8. My Life in a Cat House audiobook by Gwen Cooper.

Anywho, I really enjoyed this a lot. I have her first memoir, but I haven't read it yet. This story followed various stories about her five cats. While I don't think non-cat people would like this at all (it's very much a cat person thing), I found myself chuckling and nodding along to the antics.

I especially enjoyed listening to the audiobook. It's read by Gwen (with a brief cameo by her husband), which makes it extra special. My love for black cats has only grown since listening to this. That, and a deep love for rescue cats. I will be singing #adoptdontshop until I die.

If you're a cat lover who wants a sweet read, go check this one out. You won't regret it.

9. The Door Within by Wayne Thomas Batson. After taking his class at Realm Makers (which was hands-down the most enjoyable one I took), I decided I needed to go check out one of his books.

I enjoyed this one quite a bit. There was a lot of fun adventure throughout and I enjoyed watching Aiden grow.

Aside from normal, debut novel technical issues, there was really only one thing I wasn't a huge fan of. I'm not overly fond of heavy-handed allegories, and this one is no exception. While I don't think there was anything wrong theologically about this one and it wasn't awful, I just don't like them for a few reasons. I have a post that I'm hoping to write about this topic, so I won't spend much time on it here.

But, even with that aside, I really enjoyed this book and I'm definitely going to check out the rest in the series.

I finally found a character that I could connect with pretty hardcore that wasn't a dude! I liked that Lorelai was reserved and calculated, but not in a super annoying way. I loved her relationship with Leo. It reminded me so much of Joe and I. Like, he's usually the flamboyant, likable kind of person and I'm just an awkward bean who doesn't know how to people but totally can come up with a plan to keep everyone alive.

I also really liked that Lorelai's personality wasn't treated like a flaw that she needed to grow from. I get really annoyed when the male MC's main story goal is to try to "break through the cool exterior" of the female MC. Being aloof and calculated is not a flaw. It's a personality trait. I appreciate that it was depicted as such.

The violence caught me off-guard at first. My only frame of reference for fairy-tale retellings is The Goose Girl and that didn't really have any violence, so I guess I was expecting more of the same. But, to be honest, I was kind of thankful for it once I got used to it. It's actually very similar to what I'm trying to incorporate into my stories. Because war and famine are difficult, violent times and it's important to show that.

Overall, I really enjoyed this book and I need to get my hands on a physical copy ASAP because my personal library needed it yesterday.

In the DNF zone: I'd Tell You I Love You, But I'd Have To Kill You by Ally Carter, House of Dark Shadows audiobook by Robert Liparulo, Big Magic by Elizabeth Gilbert,

If you're curious as to why I DNFed these books, feel free to email me. I'd be happy to discuss it.

But there you have it! Mini-reviews of the books I've read this summer.


Onto y'all! What was your favorite summer read? Least favorite? Any mind-blowing books that I just have to check out? Let me know down below!