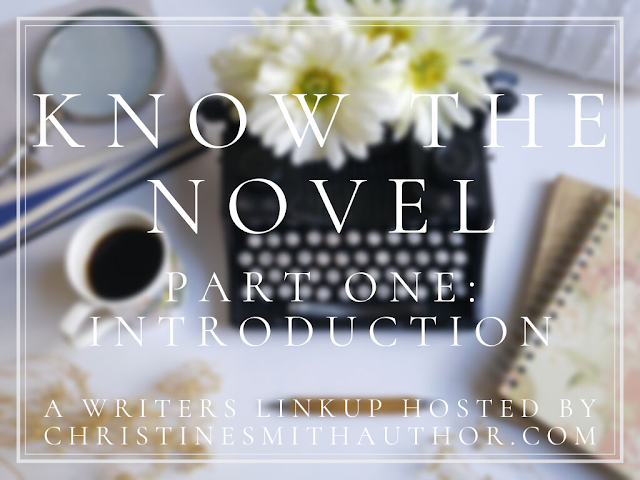 AHHHHHH!!! Know the Novel is back and I'm not hoarding a super secret project, so I can actually participate this year!!!

I may or may not have pestered Christine about this back in September because I so desperately wanted a chance to be a part of this.

Anyway, for those of you who don't know what Know the Novel is, it's a 3-part linkup hosted by Christine, where she asks ten questions about our WIPs during October, November, and December.

I chose to not participate much last year because I was trying to keep Simon Says a secret until November. This year, I don't have such a problem.

I'll be sharing all the details about my upcoming WIP, The Gingerhaired Girl, during this linkup and the WIP Special happening in November!

Now onto the questions!


~1. What first sparked the idea for this novel?~

I honestly can't remember. I seem to remember having "The Gingerbread Man" going through my head and it reminded me of the same creepy vibe I had with Simon Says.

Once that idea stuck, I thought how it would work with a serial killer. So now my beloved SS, which was supposed to be a standalone, now has a companion novel with a few more ideas in the works.

I'm actually going to save this for the WIP Special (wanna make sure I have something fresh to share with y'all then). But I'll give you a basic aesthetic so you can get an idea of what it's about.

3. Where does the story take place? What are some of your favorite aspects about the setting?

The story starts off in Atlanta, GA, many years in the future. I think one of my favorite aspects of the setting (besides it being set in what I consider to be my second home) is the fact that I get to have the fun of subtly hinting at things that are happening in other parts of this dystopian world.

4. Tell us about your protagonist(s).

My MC is Vio Biena, a young prosecutor for the city of Atlanta. She has spent her whole life thinking that working for the government is the right thing to do, but after *certain events* happen, she begins to doubt everything she's ever believed in.

My antagonist is a woman who's brother was killed because of the faulty legal system. In retaliation, she starts to kill off those who were involved with the trial, which includes Vio.

I haven't actually come up with an actual name for her, as she goes by The Gingerhaired Girl in the book. I should probably go work on that...

6. What excites you the most about this novel?

I have no idea what the heck I'm doing with a dystopian crime thriller and I feel like that's pretty exciting.

7. Is this going to be a series? standalone? something else?

It's going to be part of a series of companion novels. There will be several books that can be read separately without anyone really missing anything (though I'm thinking of having a wrap-up book where all the characters intersect and have a big final showdown).

Both Simon Says and The Gingerhaired Girl will be a part of this, along with at least two more books, all with children's songs/games/stories as the inspiration.

8. Are you plotting? pantsing? plansting?

No one, not even the person living under a rock, will be surprised by my answer:

9. Name a few things that makes this story unique.

It's a slightly different take on a dystopian. Instead of focusing on the "awful dictator" and the "resolute protester", it removes itself a bit by focusing on the people who are affected by their culture and the choices they make because of it.

It looks at the prosecutors, the police, and the people who live with the consequences of the main players' actions and see how they feel about it. Do they really believe in the cause? Or are they following blindly? Are they forced into their position? What would they do if they had a choice?

10. Share a fun “extra” of the story (a song or full playlist, some aesthetics, a collage, a Pinterest board, a map you’ve made, a special theme you’re going to incorporate, ANYTHING you want to share!).

I didn't... really make anything for it this time around. I kind of recycled stuff from Simon Says and called it a day. I have a few pins, but nothing exciting.

I did make up a cover, but I'm probably going to share that in the WIP Special as well.

To be fair, I came up with this idea only a few months ago and still managed to finish an outline before NaNo started. I usually spend at least a year mulling over an idea before writing it. So I guess it's okay that I don't have much as far as aesthetics and playlists go.

But, as far as theme goes, y'all know I love incorporating a solid theme into my books and this one is no exception. A common theme that has threaded its way into this series is that we are all sinners. No one is good or righteous in and of themselves. Our best intentions are filthy rags. We need salvation. We need God's mercy. I strive to show that in my books by not using a clear good guy/bad guy. All of the characters are flawed and sinful. Some hear the gospel and repent. Some don't. Some may seem "better" on the outside, but are in equal need for salvation.

That's all for this week. I hope you enjoyed learning about what's been brewing in my mind over the past few months. It wasn't what I was planning on working on, but I am so excited that it popped into my mind!


Onto y'all! What are you working on right now? Where'd you first get the idea? What sorts of themes have you found popping up? Let me know down below!