Why Bother With NaNoWriMo? 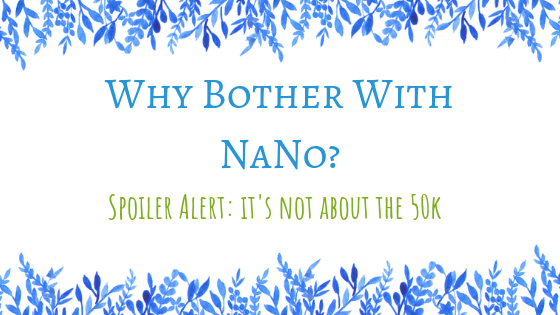 You're probably tired of seeing posts about NaNo, especially if you're not interested in participating. You have zero interest/time to write 50k in a month. I get it. And that's absolutely fine. But I want to tell you something that I learned. It might just even change your mind about participating.

If you ever read any of the founders' stories about the first few NaNos, it had nothing really to do with writing 50k words in a month. It was about stretching yourself as a writer. Learning about yourself.

Somewhere along the way, a lot of folks have lost that perspective and discouraged themselves from even trying because they're so wrapped up in a number.

I read so many posts last year about discouraged writers who have chosen to not continue with NaNo because they had such a difficult time that month. That saddens me because they've blown past something so important.

It's about learning what kind of writer you are. A journey of self-discovery.

There's something about the struggle of trying to reach 50k in a month that brings out defining characteristics in a person, be they good or bad. What did your struggle show you?

Maybe in your struggle to find time to write in your busy life, you discovered several time-wasters that you could minimize or cut out entirely. You learned how to value your time.

Or you were in school and had a lot of demands on your time, so you used the little scraps of time to write. You learned how to make time for the things you love, even if it's just a little bit.

Or you battled with illnesses during the time and had to fight for every writing session. You learned that strength is so much more than physical.

Or you struggled with getting yourself motivated and had to give yourself kicks in the pants to put in the work. You learned self-discipline.

Maybe you don't reach 50k, but I am certain you will walk away having learned something about yourself. And I promise it'll be worth it.


Onto y'all. Have you participated in NaNo? What lessons have you learned about yourself? How have they applied to your writing life throughout the year? If you're giving NaNo a shot this year, what do you think you'll learn about yourself?