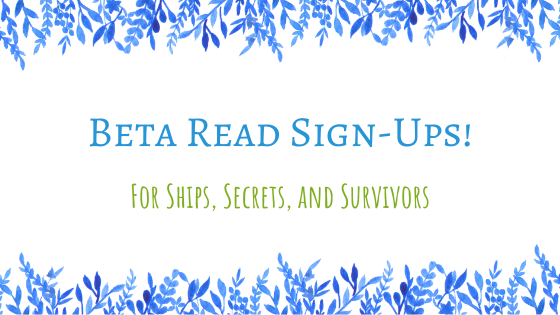 Yes, you read that right. Ships, Secrets, and Survivors is coming to you for a beta read. It's time for Jules and I to put our story out there for other people to hack to pieces.

Anywho, we're putting some finishing touches on its current round of edits right at the moment and we hope to have a beta read during April while we work on other projects.

If you're not sure what in the world Ships, Secrets, and Survivors is, here's a blurb!


A knife-wielding princess risking her reputation.

An assassin trainee fleeing his profession.

A talking ship with a mad captain.

Princess Adima Radi Kashinda dreams of more than inheriting the throne and ruling Antovan. She desires to make a true difference for her people. When her name is called on Selection Day for the Scaera Dumeda—a yearly test for those wanting to join the Alliance Ambassadors—she throws away her title, despite her family’s threats of disownment and the uncertain future ahead. This may be the opportunity she hoped for.

Ravin should be dead. No one forsakes the assassin profession and lives—until now. Continuing to evade capture and certain death, Ravin hides on a ship and joins the crew. Then his name is announced on Selection Day, declaring to the entire world—and the assassins hunting him for revenge—that he is alive. With his cover blown, he tries to explain to the officials that he never even took the entry test, but they force him into the event to avoid admitting their own mistake to the public.

Then some of the other selectees are found murdered, and Ravin and Adi are among the suspects. With the help of Ravin’s captain and crew, they sail away to hunt down the person responsible for the deaths and clear their names. But can they catch the murderer when he always seems to be at least one step ahead?

Turn around: We're hoping to have it turned around by the end of April.

Anyone who's interested in reading a book all about clandestine tests turned deadly, pirate hunters, assassins, and princesses who want to change the world, feel free to fill out the form here!

We're planning on limiting how many beta readers we have, so if we get a lot of entries, we'll do a draw. Those who don't get the full draft will still get the first four chapters to beta read or for their own enjoyment.

This is an exciting step for us and we're nervous as all get-out thrilled to bring more people along for the ride!!