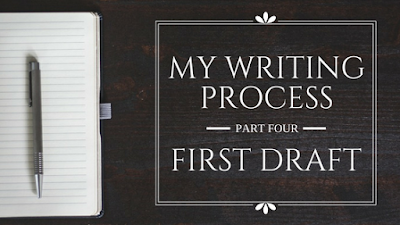 Hey y'all! Welcome to week four of my writing process series. This is where I talk about the system that works for me and the tricks that I use when I write. You can check out the other posts at the links below:

This week I'm going to focus on how I write first drafts.

Let's face it, they're not usually the favorite thing. We've all heard the complaining. We've probably been the complainers at one point or another. But what if I told you that you could actually ENJOY your first draft? *gasp*

Yes, it's actually possible. The trick is to find the method of planning (or not planning) and writing pace that works for you as an individual. It makes the entire process pleasurable.


~The Result of Planning in My Drafts~

I've found that if I follow my process for planning, I never seem to have sagging middles. Using the conflict chart is a lifesaver when drafting. Each scene is working towards a new conflict, instead of there being dozens of scenes that are just sitting there for filler. I might have a scene or two which aren't as fun to write, but for the most part, I love each and every scene.

I've heard of lots of people who prefer to find things out as they are writing. Pantsing or Plantsing makes drafting extremely pleasurable for them. They found what works for them. So that's my advice for y'all: find what style of writing works for you and use it to the best of your abilities.

With that being said, if it's not enjoyable for you, perhaps you should try a new system. It doesn't have to be dramatically different. You just need to change up something to see if it makes the process easier for you. I always try to try something new for each story. Some things work out, some don't. You'll never know if you don't try.

The next point in first drafting is the actual time it takes to write the thing. My personal first rule of thumb for first drafts is to write fast, but not too fast. Great job, Sarah, for starting on a confusing note! Let me explain by showing you an example of writing too slow.

My first two books took one year and two and a half years respectively. The length of time shows in the drafts. Things were dry and boring. I also had huge plot holes because I couldn't remember important details. I wrote about them a year ago, how could I remember them that well? Both of those stories have proven to be a challenge when editing (though not entirely impossible). Obviously, that system didn't work for me.

Now I'll move on to talk about writing too fast.

Fast forward many years to my fifth book, Starlight's Hope. I just finished writing the first book in the series and NaNo was approaching quickly. I knew I wanted to write the third book during November, but I wanted the second one finished beforehand. So what did I do? You guessed it! I wrote that beast in two weeks. Practically a day before NaNo started.

What a disgusting mess! I'm gonna have a time editing it because I wrote it way too fast. I didn't take the time to think about what I wrote. I slapped words down and called it good. That system didn't work for me either.

My sweet spot, I think, was when I wrote The Herbalist's War. I combined all of the tips I wrote about in the past few weeks, plus this one tip and it worked out beautifully. I wrote the first 52k during NaNo of 2016. I set it aside for a few months, then picked it up again during the April Camp NaNo earlier this year. The result was lovely. Not perfect because it is a first draft. But it was far from the messes I used to write. I don't even think editing it will be all that bad.

The biggest lesson I learned from NaNo is that I'm not interested in going for ultras during November (or any other time of the year). I have personally decided that if I hit 50k and I want to take a break, I will. No pressure. I'll pick the draft back up in a few months. I find I get exhausted around 50k, so the break is pretty much a necessity anyway. When I come back in a few months, I'll come back with renewed vigor for my story.

With that said, there are a lot of people who either like to take their time writing the first draft because they like to edit as they go (or they like to think about what they're writing) and others who like to write lightning fast without stopping to wonder if what they wrote is worthwhile or not because they don't want logic getting in the way of their creativity. These systems work for them. It all boils down to finding what works for you as an individual. These posts are just the way I do things, not necessarily the way you should do them.

I know that was quite a bit of information, so I'll recap it here.

1. Find your writing planning style.
2. Try new things, especially if something isn't working for you.
3. Find your pace.
4. Enjoy your writing as best as possible. There will be times you maybe don't like writing, but find ways to always love it.


On to y'all. What new things have you tried that worked for you? Or failed? What is your preferred writing pace? What was your easiest, most enjoyable first draft ever?
Labels: Encouragement My Writing Process The Herbalist's War