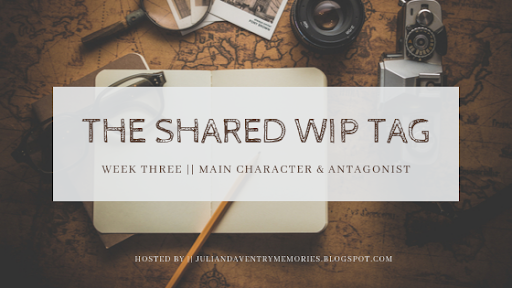 Welcome to week three of the WIP Special and NaNo. How has writing been going for you?

If you missed them, you can find the last two posts here and here.

This week we're focusing on our MCs and our Antagonists. Hope you enjoy meeting Vio and Ginger! It'll likely be brief because I didn't get as much time to get into their heads prior to writing, so I'm not as acquainted with them as I would like.


~Would you be friends with your MC? Why or why not?~

Yeah, I think I'd be friends with her. Maybe not the best of friends, but we'd get along fairly well. We're both pretty focused, driven people, so we'd probably not spend a ton of time together, but we'd respect each other.

~What would an ordinary day look like in the shoes of your MC?~

Except no day in this book is an ordinary day for Vio, so very little of this actually pans out for her. Hehe!!

~You’re walking down the sidewalk when the villain approaches you and tells you he needs your help. What do you do?~

Ask what she needs help with. Proceed from there.

If it's something worthwhile, I'll help. Even bad guys deserve help sometimes.

If not, I'll just move along.

~What would be your first impression of your MC upon meeting them?~

~What would be your first impression of your villain upon meeting them?~

~What would happen if you were stuck in an elevator with your villain for five (or worse, ten) minutes?~

I don't think much would happen. I think we'd probably even have a fairly decent conversation (if either of us was up for talking, which is very unlikely). She's only interested in the people who had her brother killed. I wouldn't likely be an issue at all.

Most like me: She is willing to grow and change if shown that her current habits are harmful in some way.

Least like me: She's important to the government and I'm very much not (thank goodness!).

~What song or selection of words best describes your villain?~

Vio: "I didn't know houses this nice existed in the middle of nowhere!"

~If the antagonist had a dream come true, what would it be? (no spoilers!)~

That her brother would still be alive. That he would walk through her front door. Would grin and tell her all about his day. That he was never taken from her. That would be her dream come true.

Well, there you have it! A little insight to my main characters.

As always, be sure to check out the rest of the posts for this week!

Just as a heads up, I'm going out of town, so it'll be a while before I can respond to comments or comment on other posts. I plan to get right on them as soon as I get back!!